Art on the Grand Tour. Week Seven. “Come to Rome, a true Democracy of Art.” Artistic Communities in the Eternal City

A major player responsible for boosting Rome to the status of cultural capital of Europe was the sculptor Antonio Canova. In lauding Rome, Canova was contesting Napoleon’s claim that Paris was the main city of culture, but Canova also believed in Rome as an Artists’ Utopia where creative personalities were free to discuss aesthetic, philosophical, and even political matters in an idyllic setting. Some of this was undoubtedly true: the English sculptor John Gibson said that he not only listened to “conversations between Canova and Thorvaldsen [a Danish sculptor] but between artists of talent of all nations.”[1] Paintings like the German artist Catel’s of an ensemble of artists (including Thorvaldsen) in the Spanish Wine Tavern convey the convivial atmosphere in which such lively debates took place, yet if one delves deeper beneath the surface sheen of cosmopolitanism, the “practice of national prejudice” (Crask) is revealed. What we have then is a more competitive arena than an international clearing house of artistic ideas, which may also be a theme in Catel’s picture. National rivalry is reflected in the attitude of the pugnacious Irish painter James Barry who wrote a whole dissertation contesting the view that an artistic nation like Italy could not be like Britain. Another cultural flashpoint was Jacques Louis David’s classically realized Oath of the Horatii lionized out of all proportion by the French, but unreservedly condemned by the Italians; it also provided the German artist- and Goethe’s friend- Tischbein with an opportunity to take an independent stance and use his pen to reveal some of the petty chauvinisms lying beneath the surface of “harmonious” relations.[2] Tischbein’s balanced assessment of the state of painting in Rome should be contrasted with German claims to artistic fraternity and cultural superiority, or to use Crask’s contemporary gloss on it,- “a German take-over bid” in 18th century Rome.

There are a variety of types and we will start with the rarest: the large, ceremonial portrait of the studio during a visit or an important event. An excellent example of this is Marten’s large painting of a papal visit to the Danish sculptor Thorvaldsen’s studio paid in 1826, but painted four years later. There are scaled down views of artists’ studios such as the Dublin-born painter Hugh Douglas Hamilton’s view of Canova posing in front of a modello for his famous Cupid and Psyche group watched by his English friend, Henry Tresham who arrived in Rome in 1775. This painting with its aesthetic and social links underlines Canova’s belief in a pan-European artistic community. The most prevalent genre of painting is the self-portrait, which itself can be sub-divided further. There are portraits of artists working (either on their own in the studio or outside) or with members of their family present.  Jean Baptiste Lallemand (1716-1803) shows himself working, with his wife and daughter in a studio which also doubles as a living room. Lallemand is seated at a drawing desk surrounded by busts, plaster casts of ancient sculpture, drawings and books. The emphasis on domesticity as well as studio practice is unusual in the genre.[3] Sometimes an artist pushes his family to the foreground while retreating into the shadows, as in Louis Gauffier’s (1762-1801) Self-Portrait with his Wife and Two Children of c. 1793. Originally settled in Rome, Gauffier took his family to flight to Florence following popular unrest with the death of Louis XVI. In his painting the artist sketches a fallen pillar in the Roman compagna while his wife Pauline has put aside her own sketchbook. Pauline was actually an artist and may have painted the portrait of her husband in this melange of art, family and Roman antiquarianism.  The next subdivision of the self-portrait genre is the type where the artist shows him or herself next to other painters, as in James Barry’s Self-Portrait with James Paine and Dominique Lefvre of 1767. Barry painted this ensemble self-portrait after he had arrived in Rome in October 1766. Paine- furthest from the viewer- was a sculptor while Lefvre was a painter, a pupil of the arch French classicist Joseph Marie Vien. Both Paine and Lefevre are shown painting the celebrated Vatican fragment, the Belvedere Torso while Barry identifies himself as a “defiantly, Romantic youthful genius.”[4] In contrast, the Edinburgh painter James More shows himself at work out in nature with brushes, palette and holding a small canvas. More was resident in Rome by 1773 and was admired by Canova in Rome and Reynolds in England, while he rivalled another artist friend of Goethe, Jacob Philpp Hackert as a landscape artist. Another artist praised by Reynolds was Angelica Kauffmann who painted her self-portrait four years after More’s. In this beautifully elegant portrayal of herself, the artist may be adhering to Reynold’s stipulation that a truly noble female portrait should have the sitter dressed in “something with the general air of the antique for the sake of dignity.”

Batoni, Portraiture and the Constitution of his Sitters in his Roman Studio.

The Italians had never really been interested in the genre of portraiture. At the start of the eighteenth-century Paris easily eclipsed Rome in this area. In his View of Society and Manners in Italy (1780) Dr John Moore observed that portraiture “is in the lowest estimation all over Italy” with hardly any pictures of the patrons who commissioned work in Italian palaces.[5] Batoni himself had hardly begun in the field of portraiture; his early work is a fusion of renaissance and baroque history painting, though the realism of the heads in these pictures looks ahead to physiognomic exactitude of subjects in the Grand Tour phase.[6] It was precisely this ability to accurately depict facial features that contributed to Batoni’s startling success. Aristocrats looking at portraits of their peers in Batoni’s studio noted approvingly how Batoni had caught the likeness of their friends, and clearly wanted to be painted by the maestro too. Batoni drew to his studio British, Irish and Scottish visitors from fashionable lodgings in and around the Piazza di Spagna, and his oeuvre of over 200 portraits might be likened to a visual Debretts or “Who’s Who” of the Grand Tour. Though he painted portraits of all ages, half of Batoni’s subjects were in their early twenties when they sat to him. Nearly half were peers, or would become so in later life; more than 40 sat in the House of Commons, and 15 sat in the Irish parliament. Several of them were of royal birth, like George III’s brother, Edward Augustus, Duke of York. Batoni’s sitters pursued varied careers, but Law, the Church and the Army were dominant. There is the odd different career path: David Garrick (actor), James Bruce (traveller and archaeologist) and the travel writer Henry Swinburne. Conspicuously absent were businessmen, merchants, financiers though present are sons of financiers who used money to purchase a country estate to leave to their sons to inherit. The greatest number of portraits depict the landed gentry including important art patrons like Lord Charlemont and the Duke of Richmond.

Goethe and the German Community of Painters in Rome.

Johann Wilhelm Goethe (1749-1832) was one of the most intelligent minds of the age. Not only a novelist, playwright and poet, he was also a scientist with interests in botany, geology, anatomy and colour theory. His Italian Journey (published about 1817) is one of the most famous written accounts of the Grand Tour, though the focus is predominantly on Rome and Naples. Goethe arrived in Rome on 29th October 1786 and left it on 23rd April 1788. As Elizabeth Einberg states, Goethe transformed the conventional Grand Tour into “an intense emotional experience, the modern idea of a man’s journey [as he put it} to find himself.” While he was engaged with this psychological quest, he benefited from the German artists living in Rome.  He soon became a member of the circle of Angelica Kauffmann and her husband Antonio Zucchi (another artist) who invited him to their soirees. Angelica lived near the studio of her compatriot Trippel who made an impressive bust of her friend Goethe. He was also painted and drawn by his artist friends from whom he took drawing lessons. Angelica painted him when he was 38 years of age and Tischbein made several drawings of Goethe’s daily life in Rome.  Goethe’s routine would be to study and read before 9, before setting out to visit the museums and galleries as well as artists’ studios. Goethe actually resided near Canova’s studio as a painter under the alias Phillip Moeller, an alias he eventually discarded. The other main German artist associated with Goethe in Rome is the previously mentioned landscape painter from Brandenburg, Johann Phillipp Hackert who spent most of his time painting in Italy, particularly Naples.

A Portrait of International Antiquarianism: Tischbien’s Goethe in the Roman Compagna.

Tischbein’s portrait of Goethe in the Roman countryside is a visual summary of the international antiquarian culture that was established during the era of the Grand Tour. Though the exact date of the painting is not known, there is reason to believe it was finished by Tischbein in Naples in 1786, who may have added certain associations between its subject and the antique itself. As Patrick Hunt says, some scholars claim that the pose of Goethe may owe something to figures on the frieze of the Elgin Marbles, which seems extremely likely. The poet records in his Italian Journey a visit to the house of Sir Richard Worsley in Rome who had returned from Greece with drawings of the Elgin Marbles.[7] Goethe was fascinated by these figures and after some of them were removed to London between 1801 and 1812, Goethe asked British artists like Benjamin Robert Haydon to send him copies in black chalk so that he and his Weimar circle could study them.[8] One of the most important elements of the painting is the classical relief behind Goethe; this is an explicit reference to his version of Euripides’s play of Iphigenia at Tauris. During 1786 Goethe worked on his Iphigenia auf Tauris which he finished and read to Angelica Kauffmann in February 1787. Goethe and Tischbein would not have been unaware of “the extant Bourbon excavations at Pompeii and in the Neapolitan Campania” and perhaps other friezes representing Orestes and Pylades in the Villa Albani. There were many painted versions of this tragic story, and Gluck’s opera Iphigénie en Tauride (1779) would have been known to Goethe. One of the most famous painted versions during the Grand Tour period was the American Benjamin West’s Pylades and Orestes Brought as Victims Before Iphigenia, of 1766, now in the Tate. In showing the Iphigenia relief next to Goethe, Tischbein may have been hinting at the poet’s archaeological mission of saving the past. Is it significant that Goethe points down towards the earth, maybe signifying the remnants of an ancient culture that was slowly being unearthed as in the excavations of Pompeii and Herculaneum? We shall turn to those next week when our virtual Grand Tour reaches Naples. 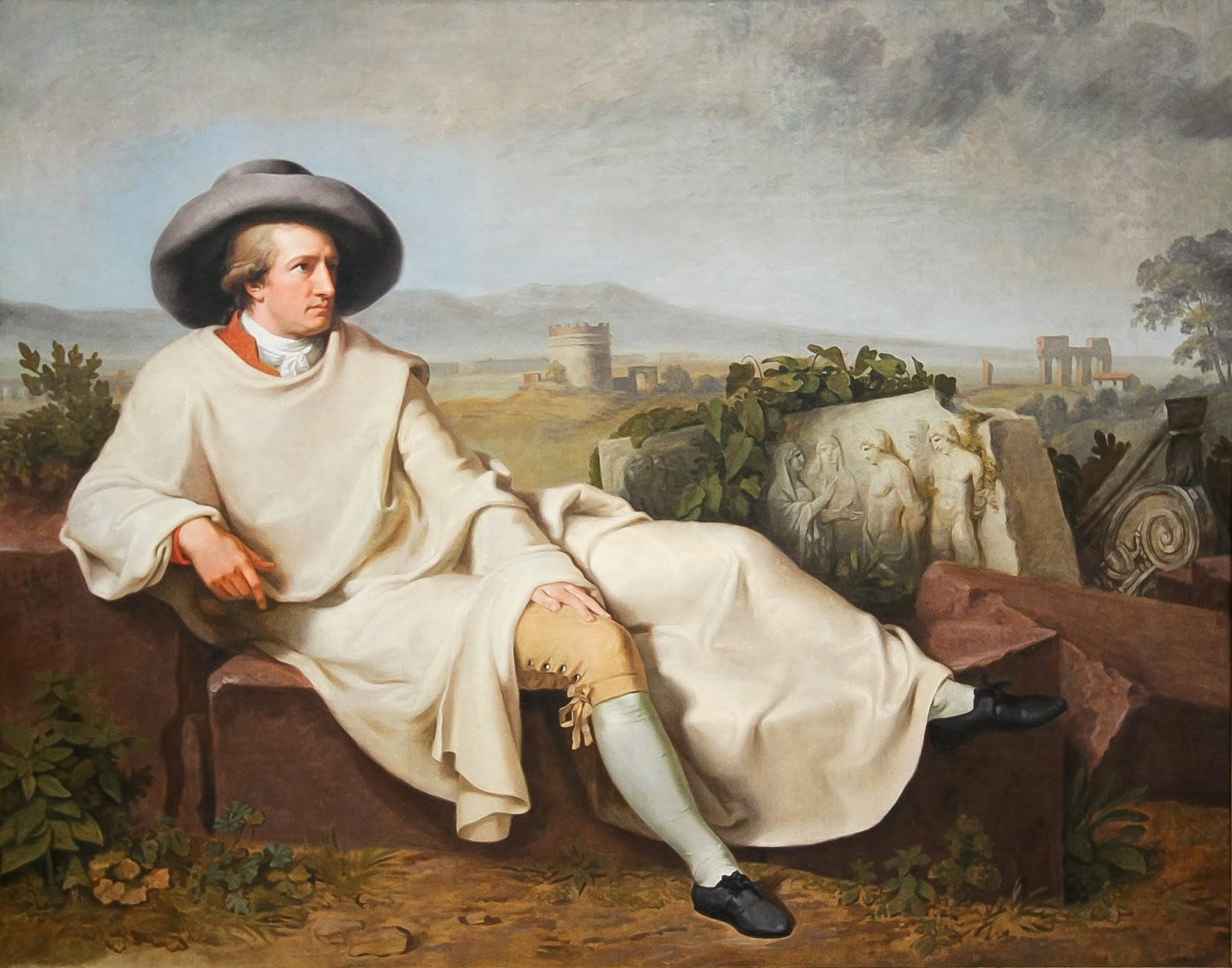 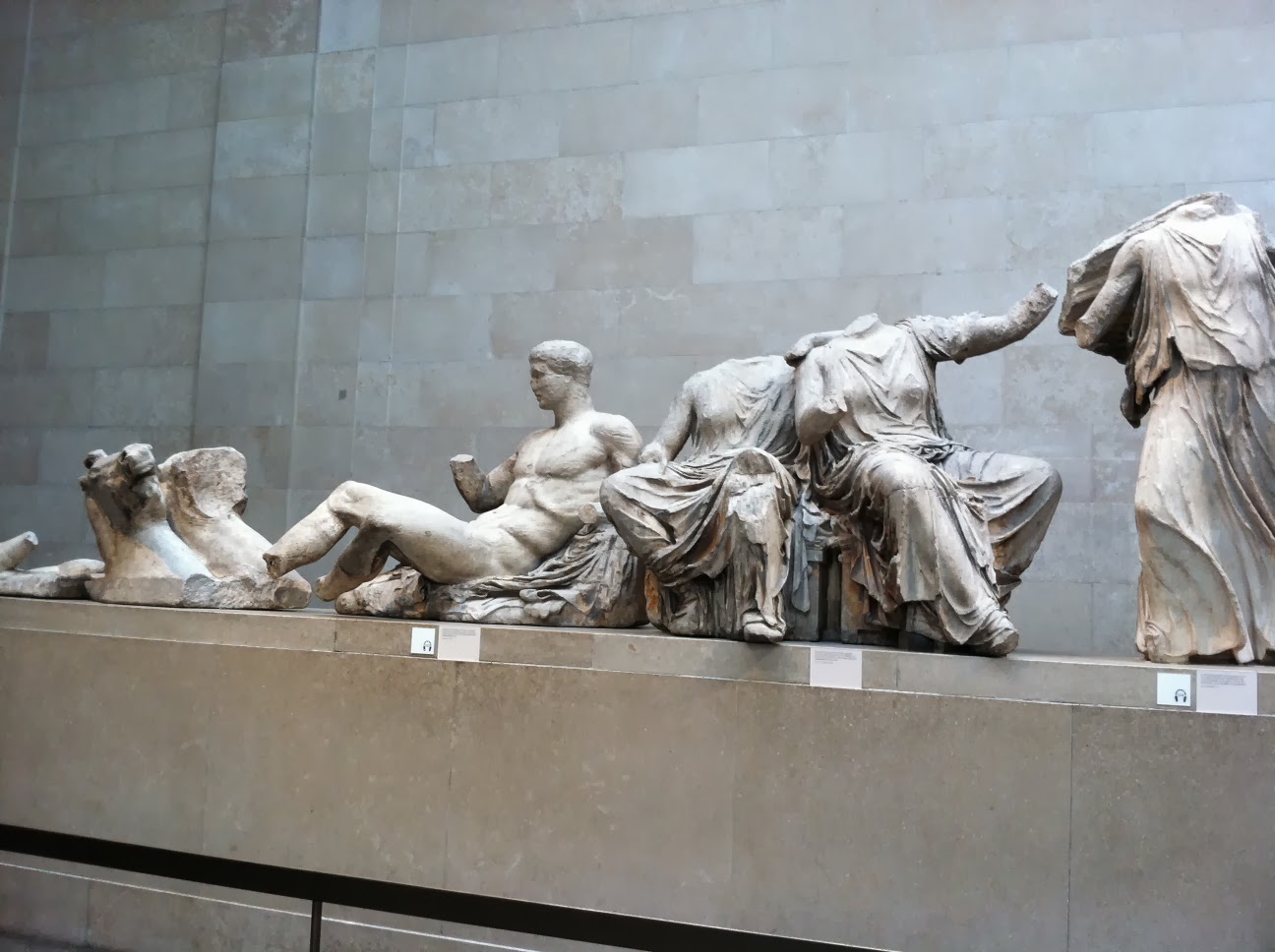 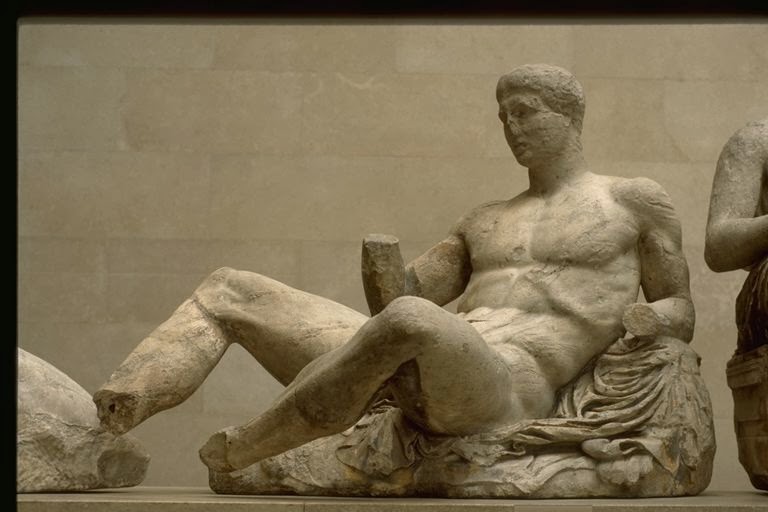 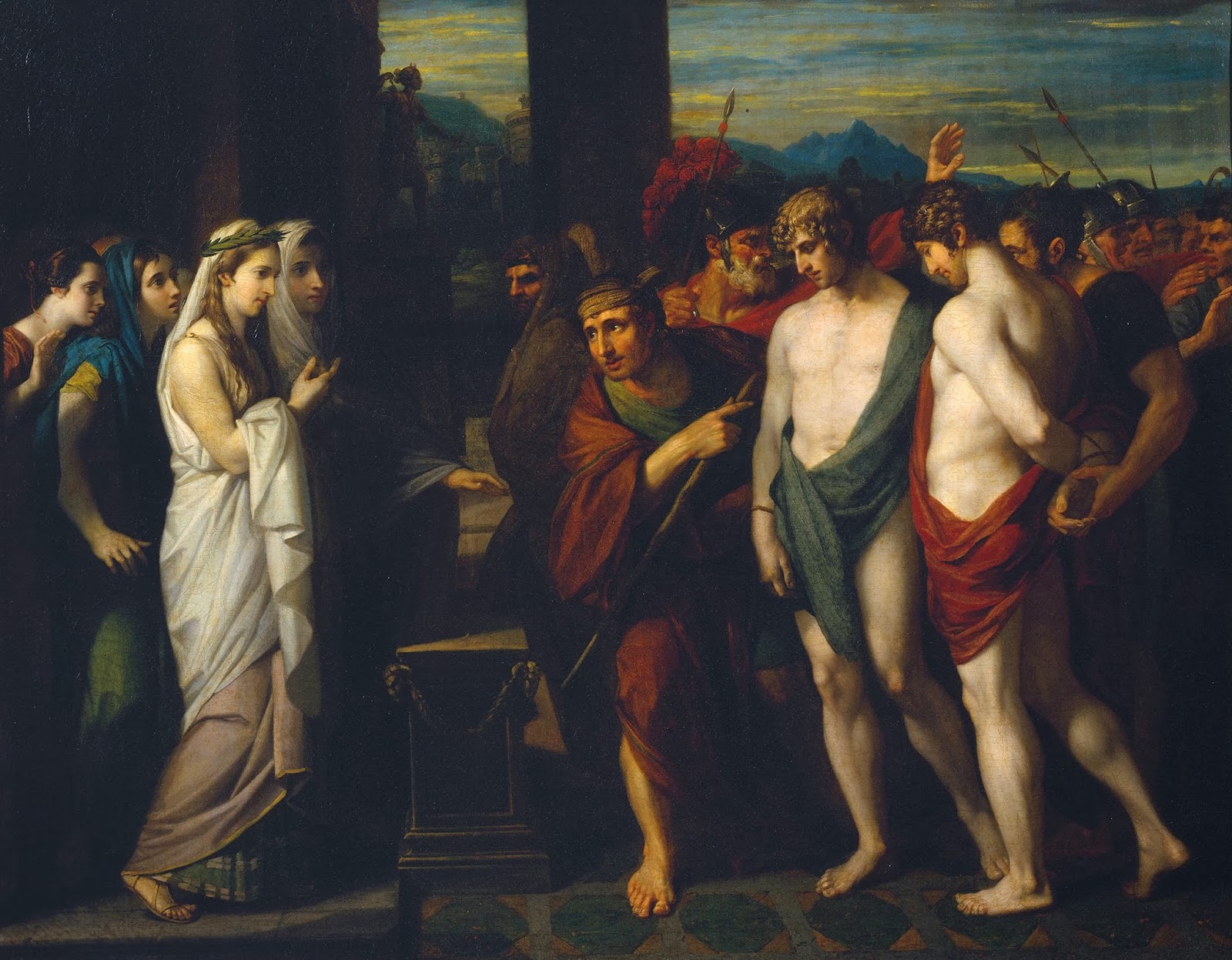 26)   Angelica Kauffmann, Portrait of Goethe at 38 Years of Age, 1787, location and measurements unknown.