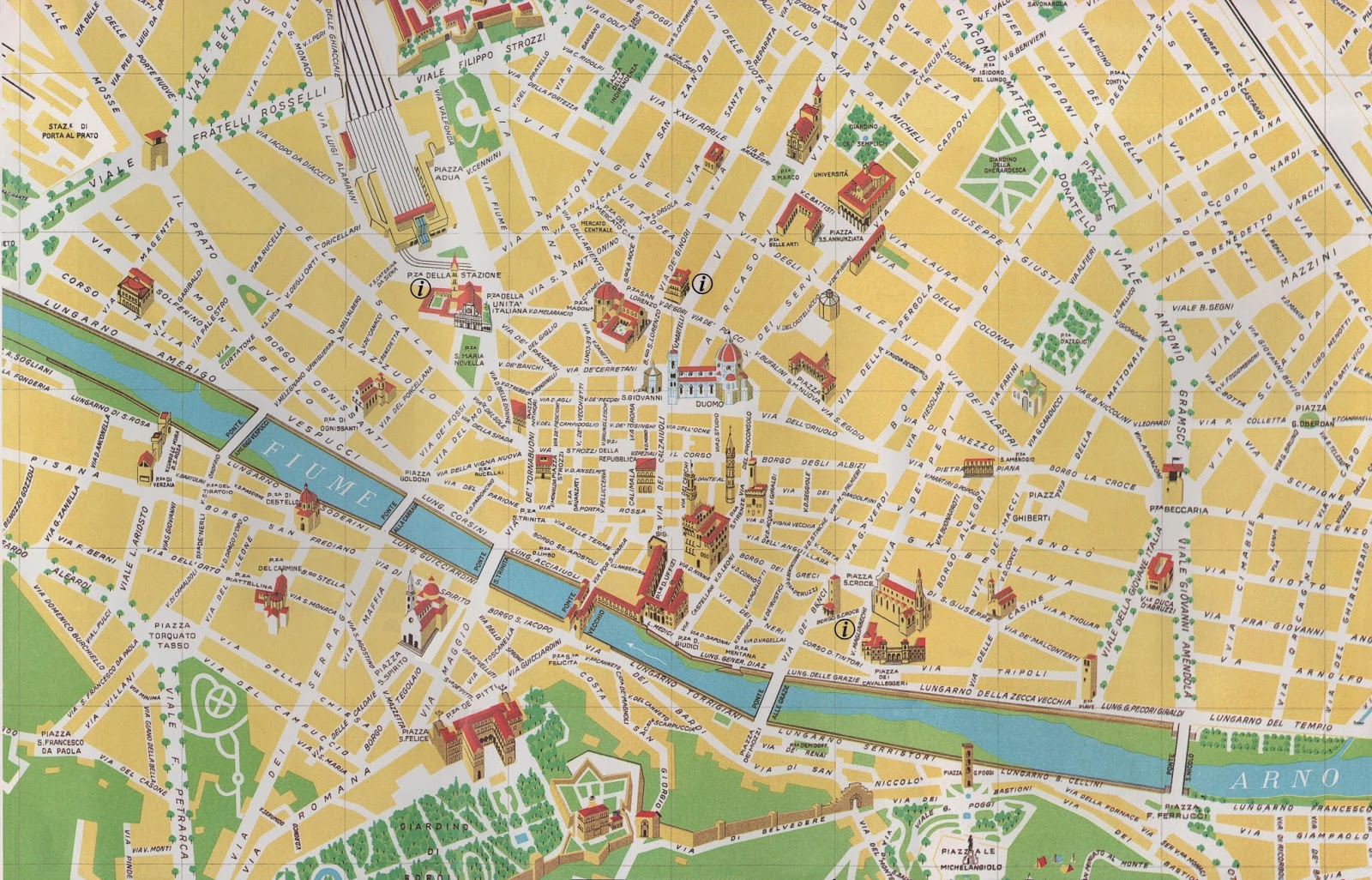 For travellers to Florence, the main attraction was the revival of the arts under the Medici, along with their collections of art, antiquities and manuscripts. These took precedence over the city’s buildings; the places where the collections were housed were of marginal importance to visitors. One Francis Drake declared that it wouldn’t matter if the collections were moved from Florence, since the buildings were of no matter, only the collections themselves. In Sweet’s words, “Florence was both described and experienced chiefly as a gallery of paintings and sculptures, rather than as an urban space of streets, piazzas and buildings; a tendency that was accentuated by the Florentine tradition of erecting statues throughout the city’s streets and squares and thereby enhancing the sense of the city as an open-air space of display.” As was shown last week, Florence didn’t appear in the visual record until later in the century when the city was mapped out for visitors. Eventually, a standard guide to Florence published by the city’s single printing house appeared.  This guide divided the city up into quarters and documented every church and building of significance within each quadrant. The geographical knowledge of visitors would vary. Stendhal says he knew the city well from studying maps beforehand, but on arrival he bought a “descriptive guide.” However, even armed with this he still had to stop twice to ask directions to Santa Croce. Stendhal dispensed with a cicerone, but it’s likely that Baron Krüdener had his own guide as part of his entourage. From reading Lady Miller’s letters, one gets the impression that she may have been more self-reliant than the German aristocrat. Though she and her husband sought advice from curators, she had her own method of recording art such as drawing antiquities in her notebook.  On arrival most visitors would visit the DUOMO or the PIAZZA DELLA SIGNORI, but generally the tourist itinerary was partial and selective.  As Sweet says, tourists “sought out monuments associated with a few key figures and the works of those artists only who were admired according to conventional eighteenth-century canons of taste.” For example, two weeks was not enough for Edward Gibbon as he found that he needed no less than fourteen separate visits to appreciate the riches of the Ducal collection. There were those who couldn’t stay the distance despite their best intentions. Master Philip Yorke hoping to curry favour with his father who was paying for his trip said that there was enough in the gallery to satisfy anyone for a couple of months. Despite this, the young Yorke tired of paintings after a few weeks.

The Canon of Artistic Taste in Florence

The following four artists (Michelangelo, Raphael, Fra Bartolommeo and Andrea dal Sarto) were considered the greatest in Florence, but Giotto and Cimabue were barely acknowledged on the tourist trail. Though Giotto and Cimabue were seen as part of the story of the recovery of the arts in Italy, their art held little interest for the British visitor. Giotto and Cimabue’s art was considered “dry” and some commentators refused to consider then at all. For example, Francis Drake refused to take his account of painting in Italy further back than the late fourteenth-century. This rejection of the early renaissance can be seen in the tendency of ignoring even artists before the late quattrocento and Lorenzo’s patronage of Leonardo, Michelangelo and Raphael.  The author of The Life of Lorenzo di Medici (1795), William Roscoe was partly responsible for resuscitating taste in the Italian “primitives” though he wasn’t the first to do so. A number of painters and connoisseurs were attempting a systematic overview of the evolution of the fine arts from a “first revival” to the perfection of the quattrocento. These included Thomas Patch who had authored a Life of Masaccio (1772) as well as publishing engravings of artists like Fra Bartolommeo. Later, Masaccio and Masolino’s frescoes in SANTA MARIA DELLA CARMINE feature more in the comments of visitors, thanks to Reynolds pointing out their influence on Michelangelo in his Discourses.  According to Sweet it may actually have been Patch who drew Reynold’s attention towards the frescoes .when he was in Florence in the 1750s. Ignorance of the early renaissance partly explains why a large volume of tourists never recorded anything other than their reactions to the art in the gallery and Tribuna. In our current small sample, we have the generous catalogue of works made by Lady Miller and Baron Krüdener, but Stendhal broke the pattern by giving the galleries a miss on his visit in 1817, referring his reader to Charles de Brosse. As later editions of the Florentine guide became more detailed, they tended to include sections on the Italian “primitives.” As we come to the end of the century greater interest is shown in painters like, Botticelli, Ghiberti, Ghirlandaio, the Lippi dynasty, and Uccello. By the nineteenth-century Ghiberti’s BAPTISTERY doors were known, largely thanks to Michelangelo calling them the “doors of Paradise.
The Duomo, the Baptistery and the CAMPANILE were definitely on the tourist itinerary. SAN LORENZO was seldom missed by tourists as it contained the marvels of the Medici Chapel. At SANTA CROCE, people visited the tombs of Galileo, Aretino as well as Dante, Petrarch and Boccaccio, probably due to Byron endorsing Santa Croce in Childe Harold. There was also rising interest in Dante on the part of the British. His poetry was translated into English and travellers grew more interested in his life and work as conveyed through painting. Stendhal was quite overcome in this church at these funeral monuments, though he doesn’t mention Giotto’s murals. Determined travellers would visit Santo Spirito to admire Brunelleschi’s architecture as well as Sta Trinita, thought to be Michelangelo’s favourite church. Tourists would probably visit SANTISSIMA ANNUZIATA to see Andrea del Sarto’s frescoes. Apart from Giotto’s Campanile and the Baptistery, with the famous doors, hardly any other buildings would excite tourist interest. This “narrowness of vision” was largely due to the guidebooks which were consulted by visitors to Florence. Richardson’s Account was very important to the English-reading public, but it covered only the Duomo and San Lorenzo amongst all the Florentine churches in detail. An example of this narrowing of vision can be seen in the guides of Edward Wright and Thomas Martyn; though separated by sixty years both limited their comments to the Duomo, the Ducal gallery and San Lorenzo.


Lady Miller was an English poetess and salon hostess who visited Florence in late December 1770. Her letters[1] contain a lot of information about her lodgings, the food in Florence, the quality of the streets and piazzi (good, but disappointing compared to Bologna), climate (woken in the middle of the night by an earthquake and lightning striking the Duomo). She comes across as informed, read-up on Florence (mentions the Etruscan claim of origins), familiar with authors like Laland and Cochin.[2] Though she visited a number of churches she does not name them, but she left an extensive written list of antiquities and paintings in the Pitti Palace from which we can deduce that she had read Cochin and Laland. She compares Laland unfavourably with the curator at the Pitti. Her presentation is systematic (sequence describing (a) building, (b) ancient sculpture, (c) paintings and (d) cameos and jewels), but her observations on the pictures are brief and impressionistic. Her tastes incline towards the Venetians and Flemish (Titian, Rubens, Van Dyck and Van der Werf). She seems to have misattributed some pictures. Though she is appreciative of Raphael, her response is qualified. Lady Miller responded actively to some of the art- she copied some of the antiquities into her notebook.


Baron Krüdener was the husband of the author Barbara von Krüdener, a German mystic and novelist. The Baron visited Florence between 21st and 28th August (1786).[3] He entered via the Porte San Gallo on the 21st and on the same day toured the following: Santa Trinita, Duomo, and the Baptistery. Afterwards his party took a stroll along the Cascines on the Arno. The next day, after lunch, Krüdener visits San Marco Santi di Tito's Vision of St Augustine , Santa Annunziata, (frescoes of A d Sarto), San Lorenzo (Medici Chapel with long philosophic meditation on the tombs), St Maria della Novella (Cimabue). On the 23rd the party went to the Boboli Gardens and the Pitti Palace. Krudener is systematic in his description of the paintings in the Pitti, listing the paintings in each room. The names of these are given with occasionally speculation on style, e.g. “first manner”, or more subjectively (“the head is magnificent”). Unlike Lady Miller, Krüdener seems more knowledgeable about seventeenth- century and baroque art, obscure artists like Santi di Tito, Canterini and Barozzio di Vignola.  Who ? From his remarks on art in Florence, it is difficult to identify the source of Krüdener’s art knowledge, but presumably it came from his cicerone.

Stendhal was no stranger to Italy, though Florence could never compare with other cities like Milan. S enters via the Porto San Gallo ("unbeautiful triumphal arch"), deals with passport matters and walks around the town without a guide. After briefly losing his way, he finds himself before the imposing facade of Santa Croce where he visits Michelangelo's tomb and Canova's effigy of the Italian writer, Alfieri. It is not surprising that he doesn’t mention Giotto’s frescoes because they weren’t uncovered until 1853. S also discovers the tomb of Galileo who is opposite Michelangelo. Outside, he is overcome by feelings that almost resemble religious awe in the presence of great art. This is what is known as the "Stendhal Syndrome." S visits Santa Maria della Carmine, but feels himself ill-disposed to appreciate the paintings in the Uffizi after this.[5] Instead he visits the Medici Tombs at San Lorenzo- no remarks. Out of our three writers, S is the one who considers the medieval Florence, its merchant culture and the idea of civilization. Sipping coffee in the Piazza di Signora, he remarks on the Palazzo Vecchio (better than the Louvre) looking down on Vasari's gallery (southward), set off by an equestrian statue of one of the Medici (Cosimo I); while in a cluster stand Michelangelo's David and Cellini's Perseus, together with the “charming Loggia dei Lanzi.” Here he sees "in a word, all the artistic masterpieces of Florence and all the activity of her civilization." After watching the sun set on the Palazzo Vecchio S hurries to the opera where he is delighted to discover a performance of the Barber of Seville by his favourite composer, Rossini, whose tomb is also in Santa Croce.